The end of austerity? Perhaps, to a degree. The Government had some wiggle room to have a fiscal stimulus and used it.

The room for manoeuvre came from two sources. Firstly, tax revenue has been more buoyant than expected, largely due to the greater than anticipated fall in unemployment. This windfall gain has been projected to continue out to the end of the forecast period to 2023/24. A welcome, if unexpected, gift in the forecasts of the Office for Budget Responsibility.

Secondly, the long-standing pledge to balance the fiscal budget sometime in the future, always an elusive ever-distant prospect, has been abandoned.

So, some headroom: higher tax receipts and the acceptance that there will be in the medium term an ongoing fiscal deficit. But just how large a deficit?

Towards the end of the forecast period it settles down to about £20bn a year. That is just below 1% of GDP, compared to an expected deficit this year of 1.2% of GDP (rising next year to 1.4% before edging lower in subsequent years).

The sum of all measures introduced in the budget amounts to about £30bn by 2023/24. Virtually all of this being expenditure changes, with tax changes positive next year in the shape of higher personal allowances, but neutral in the longer run.

So, had there been no changes in either spending or tax policy the deficit would have indeed disappeared by the end of the forecast period.

By 2023/24, the NHS will have had an increase in its budget of £22.5bn. The overall increase in departmental budgets announced in the Budget to the end of the forecast period was £30.5bn. In short, not much extra for all other areas of spending.

Although the earlier rise in tax allowances and thresholds will help, perhaps the true end to austerity comes not from the fiscal changes. Rather, from the forecast that the on-going pick-up in average earnings growth and continued low unemployment will, against an expected 2% inflation rate, result in a resumption of real wage and overall income growth after a decade of stagnation.

Not that growth in the economy is expected to be much to write home about, as it is forecast to fluctuate either side of around 1½%. Nevertheless, it still represents growth close enough to what is now thought to be trend to keep unemployment consistently low.

All of this of course is assuming the UK negotiates a reasonably smooth Brexit. If not, then the Chancellor will need to be back on his feet in March, finding even more wiggle room to ease the blow. 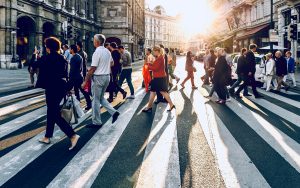 Sorry, the comment form is closed at this time.

We use cookies to ensure that we give you the best experience on our website. If you continue to use this site you consent to the use of cookies.OkPrivacy Policy